Long range rifles may seem to be capable of delivering accurate shoots at every possible distance, but they have a limit: the transonic region.

In the previous articles about static stability and dynamic stability, we have seen what it takes to properly stabilize a rifle bullet to keep it accurate to the farthest distance possible. However, at one point during the bullet flight, the stability may be compromised, exactly as it travels through the transonic region, so let’s see what that is and what happens to the bullet when that happens. 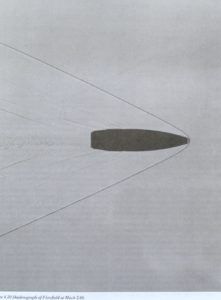 These shockwaves generate the crack that you can hear if you are alongside the trajectory of a bullet that is travelling at supersonic speeds. It is the same explosion, the so-called sonic boom (or sonic bang), that you hear when a jet fighter flies supersonic above your head.

When a bullet flies through the transonic region, the aerodynamics dramatically change. As we can see from the set of shadowgraph pictures to the right, the shockwaves shift from the tip of the bullet backward to the tail as the bullet approaches and then crosses the sound barrier at Mach 1.

What happens in terms of ballistics and accuracy, is that the center of pressure shifts forward toward the tip of the bullet. The shifting of the center of pressure lengthen the lever between it and the center of gravity, amplifying static and dynamic instability. The result is that the bullet angle of attack and yaw might dramatically change, invalidating all the trajectory predictions made by ballistic software, and making it impossible for us to compensate correctly for drop and drift. It might also produce an increase in wobble, which can lead to an accuracy decay and can make the bullet tumble. That’s the reason why shooting beyond the transonic range (the distance at which the residual speed reaches Mach 1.2) results in “key holes”, that is, holes made on the target by tumbling bullets that impacted on their side, instead of at the tip.

Generally, the best thing to do is to try to avoid the transonic region and set the distance at which our bullets go transonic as the maximum effective range of our weapon system.

This article closes the series on external ballistics. In the next article I’ll talk about MOA an Mil, explaining what they are and trying to clarify some doubts that shooters often have about them. After that, we’ll start to put all this theory we’ve learned up to this point into practice, starting with ballistic tables (learning how go read them and how to create one), and on to talking about long range shooting techniques. Stay tuned!