My Case Builder (MCB)  has an amazing online low-cost precision simple system that allows you to custom design your own gun case–we decided to put it to the test by designing a completely and pretty weird foam liner.

Our “leader” needed a gun case (My Case Builder can make custom liners and cases for cameras, electronic gear or anything for that matter),* so we decided to put the My Case Builder system to the test. These particular guns are not everyday guns for which

My Case Builder (MCB) has hundreds of firearm image profiles enabling a client to simply move into the foam profile to fit any gun case or one of their many commercial gun cases.

IT WENT FROM THIS UNSECURED CLUTTERED MESS 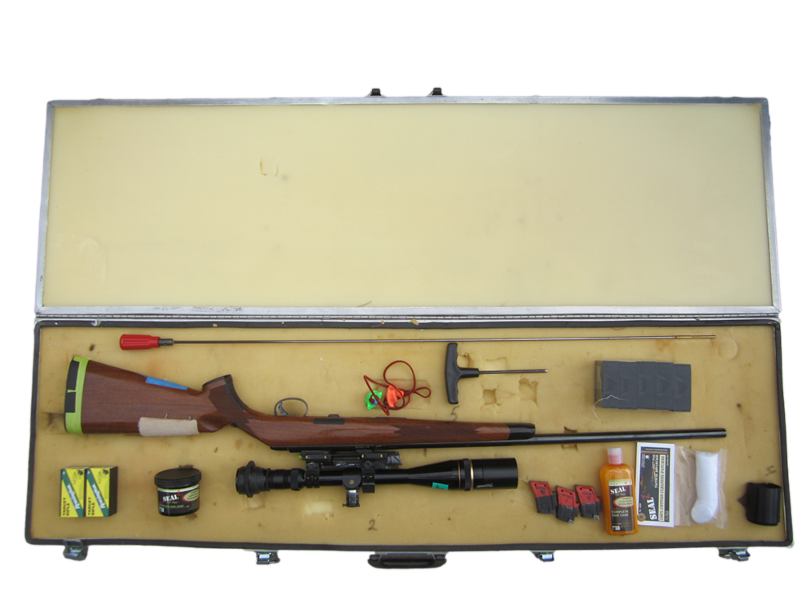 TO THIS BEAUTIFUL, SECURE AND COMPACT SETUP 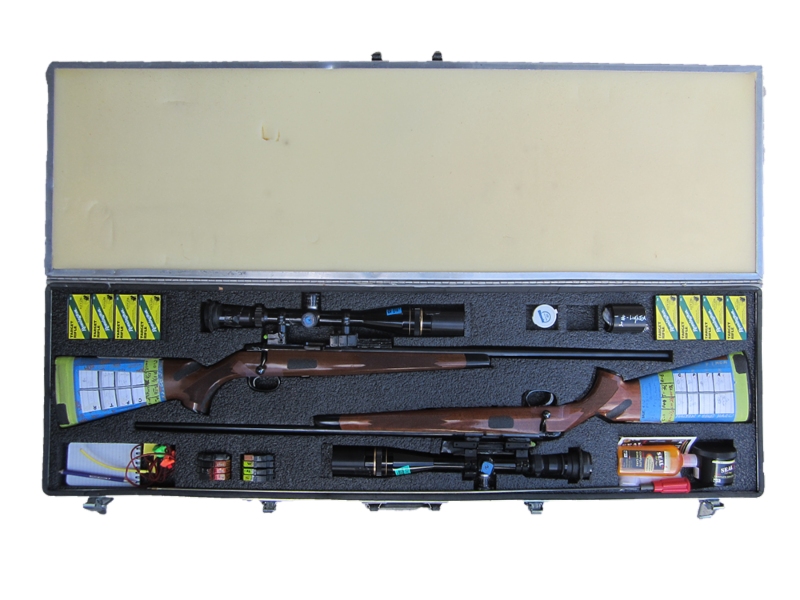 This project would be tough because it would be done by our computer challenged boss for his competition small bore silhouette rifles. We figured if he can do this correctly–especially with one off specialized scopes and mounting systems–then anyone can do it! For years he has used two heavy-duty aluminum cases with pillow soft foam liners to truck a couple of semi-scarce silhouette competition rifles around to various matches. He dared never to try to put both guns in the same case because they would beat each other to pieces. However, one gun case makes sense for ease of use and convenience.

The Problem: He has two internally modified .22 LR caliber Remington 541’s that easily group ten shots under ½ inch at 100 meters and have been out of production for 20 years (too costly to produce). They both have specialized scopes and crazy mounting systems. the goal is to try to fit both into one case, yet effectively protect them and their custom scopes. Here is the whole project in the order in which it was done, and we remind the reader, this is a true one off custom set up–normal stuff is not this complicated.

1)  For this particular one off custom project it was necessary to send a clear “photo” image of the guns to MCB. The rifles were separately placed level on white butcher paper outdoors and photographed with a regular camera from straight above to reduce or eliminate shadows. The images were emailed to MCB and were judged good to go. For 99.5 percent of submissions this step is NOT necessary.

2)  He went to the user friendly MCB system and entered the dimensions of his gun case. A new problem: The thickness of the guns in the base half of his particular gun case is greater than the foam thickness in that  part of his gun case. So he entered measurements into the MCB system so that ¾ inch of foam remained in the bottom half of the case for protection. This meant the guns would stick up some above the top of the bottom half of the case’s foam.

Typically with MCB’s system, firearms can be 100 percent “inlaid” flush into their high-density military grade polyethylene foam base for maximum safety but his rifle case bottom did not have the depth.

3)  For image scale he entered length, depth and width of the guns into the MCB system.

4)  He moved the photo images into the online gun case. Using MCB’s magnification tool he enlarged the image and used MCB’s really nifty and handy tracing tool to outline the rifles and sighting systems which ultimately creates the foam cutouts. Again, this is not necessary except for unusual custom stuff like this.

To MCB’s chagrin (they like tight precise great looking fits) he allowed some space around the sighting systems/bases and the stocks should it later be necessary to tweak the optics or to add spacers to the stock’s for competition needs. This still left plenty of dense foam contact to hold the guns securely in place. This process could be done for almost any object from your dress shoes to a photon torpedo!

5)  He measured the magazines and ammunition boxes, then using that information placed several cutouts in the foam to fit these items and accessories in locations of his choice – all with a bit of space for ease of removal. They too were designed by him to project a bit above the base foam. This all took about five minutes. These parts could have been precisely fit tight and flush if so desired. MCB has nifty finger cutouts that can be placed where the client wants for easy removal of gear which he did not use. MCB can even make multiple layer (stacked) inserts for tall and larger cases of any kind.

6)  Once his goodies and guns were placed into MCB’s virtual gun case, he saved the image and submitted it to MCB for a company required and free practicality review to ensure the proper level of protection is provided.

7)  He placed a couple of calls to the consultants at the company (because we would not help him–part of the rules for this project) to ensure he was doing things correctly. MCB phone consultation is also a free service.

8)  Project was approved by the MCB consultants and the typical 10-18 work day wait for delivery began.

Did it work? When the custom foam insert arrived it was installed into the gun case. The fit was dead on and exactly what he wanted, as you can see in the before and after images. Believe us, if he can make a custom case like this, it is duck soup for anyone else, and more standard items would be much easier and quicker than this one hour project.

*About this one of a kind project–If you have custom guns or items, you can design your own precise fitting setup and it is all at NO extra charge. MCB maintains a huge inventor of hundreds of gun, camera and gear profiles you can use to quickly design your own insert for your own or a new case which you can purchase from them. Our “leader” also cut a couple of small pieces of foam that that were used as packing material and fitted these in a couple of areas in which there was a large amount of space which he had reserved for adjustment such as the scope position. If necessary they can easily be removed.

The cost of the custom fitted foam liner for this custom project was only $55.13! Really!

This is a spectacular product and we cannot recommend it enough as it provides incredible protection for any contents. What was more amazing, our boss told us he actually enjoyed doing it and he hates “computer stuff!”

Amazing company follow up and assistance: If the function and gear protection check determines that your design doesn’t fit and/or doesn’t properly protect the contents, a company representative will help you adjust your design until it’s right and all at no cost!

Prices range from $12.00 to $380.00 for foam inserts only, depending on the size and configuration of the case to be filled. At MCB’s website it takes about 30-seconds to determine the price before you buy. How the foam is cut and fitted is all included! Our foam insert cost $55.13.

For a complete case and insert all major brands of gun cases are pictured. Simply select the case of your choice, pick the foam to fit it and the price is displayed.

Experience: MCB has decades of experience and top-level, first-hand internet customer service that no other production case company can begin to provide and it is many times better than a shooter with a knife can whittle.

Bottom line: My Case Builder produces an amazing custom product with a personal touch at low production prices. MCB manufactures one of the smartest firearm or gear products we have seen in years.