Earlier we covered the 1886 Lebel rifle and its groundbreaking 8x50mm smokeless powder cartridge. But as it turns out, the gun was not suited for some troops of the French empire. France needed a short gun to equip cavalry and artillery troops. A shortened Lebel rifle was tried, but because the gun had a long tubular magazine under the barrel, capacity was limited on a short barreled version and the awkward loading procedure made reloading from horseback a chore. Enter the French Berthier series of carbines and rifles. Unveiled as a three shot carbine in 1890 and named after the railroad engineer who designed it, Adolphe Berthier, it proved to be far more than just a support weapon in the melee that was World War I. 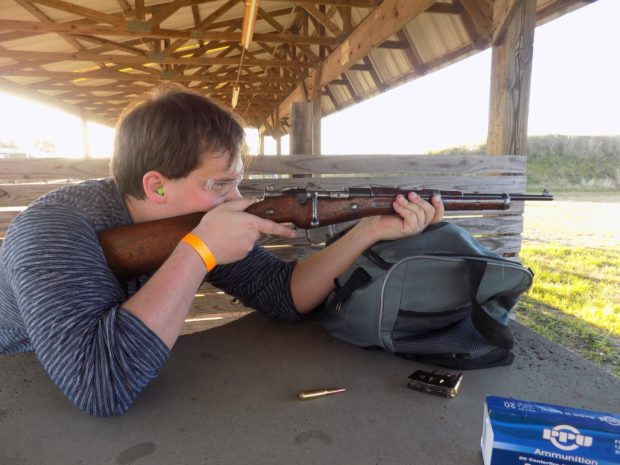 This handy carbine used a Mannlicher style of feeding system in which an en bloc clip. The magazine itself just has a lock to keep the clip in place and a large leaf spring to push cartridges up while the clip feeds the cartridges one at a time. It was a fast loading proposition and when the last round was chambered, the now empty clip would fall out of the bottom of the action via an open slot. Unlike the Lebel, the Berthier has a one piece stock and a very handy barrel length of just under 18 inches with a large blocky front sight and a rear ladder graduated to 2000 meters. In the end, the gun proved so popular that it was given a rifle length configuration, first for colonial troops, and then as a substitute standard rifle in the Mle 07/15 when war had broken out. The reasoning was simple, the Berthier was simpler and cheaper to produce.

However, that three shot capacity got old very quickly and the lack of a wooden handguard over the barrel meant burned hands with extended firing. Also, that open hole in the magazine was a great place for mud to get into. Though slow to getting to the front, this new m16 pattern was adopted with a five shot configuration, a wooden handguard, and a spring-loaded trap over the hole to protect it from the elements. The full sized rifle was also upgraded for a five shot magazine as well, though relatively few saw use by the end of the war.
Like the Lebel, the Berthier series of guns stayed on staff until it was replaced by the modern Mas 36 in 1936, but it remained in rear line and colonial service in time for World War II and a number of post war conflicts. My Berthier carbine was originally an 1890 pattern, but given the World War I upgrades. 8x50mm Lebel rounds can be had by suppliers like PCI and Privi Partisan. My favorite load, and the only one that is commonly available, is the Privi 200 grain Full Metal Jacket round that closely replicates the old World War I Ball D round. Loading the Berthier is relatively easy. Just retract the bolt and push a clip of five rounds into the magazine until it locks and you are ready to go. These old clips tend to be finicky so some fine tuning might be needed for reliable feeding. There are new production clips that are available, though equally expensive at about $15-30 a piece. The Berthier carbine’s thick sights are not conductive to pin point shooting like on the longer Lebel rifles, though the Berthier rifles have the same sights as the Lebel. Despite that, I was able to get a group of 2 1/4 inches at 100 yards and about 1 foot at 200. Respectable, given the sights. Recoil was stout in this handy little gun, but not unbearable. The bent bolt handle is a bit to reach, but it is easy to cycle the gun once you get a hang of it. There is no need to snap the bolt back smartly, like on the Lebel. Overall, a very smart weapons system for the time. The clip loading Berthiers meant for rear line use got a hellish baptism of fire in the crucible of World War I and proved extremely popular and handy in the close trench fights. Considering these guns were still in use through the 1940s really says something about how handy and likeable the gun was, along with the bureaucratic French bean counters in charge of arms development. It soldiered on far longer than any other clip loader. With over two million made, Berthier rifles and carbines are out there to find, though usually in a five shot configuration with many of them being post war conversions. Though not as iconic as the Mauser or even the Lebel, the Berthier in its time was a unique PDW and definitely turns heads on the range.