Rust, like death and taxes, is a fact of life. Guns, especially if they’re not stainless steel, run the risk of falling victim to rust. The best finish can scratch and fade over time, and rust appears out of thin air, or humid air, as the case may be.

Concealed Carry Guns are especially vulnerable to rust due to the proximity they have with the human body. Our sweaty bodies tend to be rust-making machines. There’s nothing like a salty liquid to cause rust. Besides, the weatherman has been wrong from time to time, and he’ll leave you stuck out in the rain with your weapon. Or, if you live in an area close to the ocean that gets those nice, high 70% humidity levels as I do, you know guns can rust pretty much overnight. As the miller of many an 80% lowers, rust is all too common problem. Removing rust from a gun is a simple procedure, and I plan to detail it below.

Removing Rust from a Model 10

First, let’s take a look at a friend of mines Smith and Wesson Model 10 snub nose revolver. It’s her ‘boat’ gun and has been heavily exposed to the saltwater. As you can see, this poor Model 10 is in poor shape. The rust is deep, and not simply wiped away with some Rem Oil. If it were simply a few rust spots showing up, I’d recommend the Rem Oil without question.

This beautiful revolver has become an ugly duckling. However, it can be saved.

Removing rust is simple, but you have to be very careful when it comes to preserving your firearm’s finish. All the tools I have are dedicated to protecting the finish while getting rid of the rust. 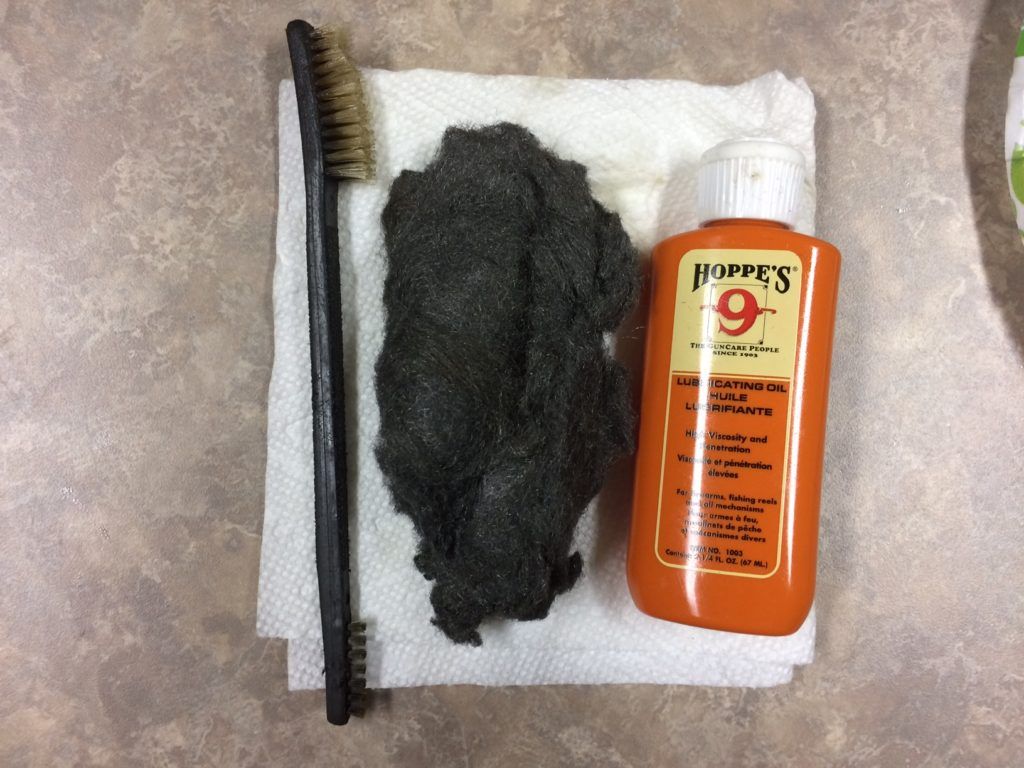 Get to Work: Step By Step

The first step is to apply liberal amounts of gun oil to the gun, focusing on where the rust is mostly present. You can let it sit for a while to loosen the rust. Then begin scrubbing with the AP brush. Go in there hard and deep, applying oil to the brush every so often.

Wipe at will to remove the rust mixed with the cleaning oil for better clarity. This gun is a special case because of how deep the rust is. Removing rust can be as simple as a little oil, a little time with an AP brush, and then wipe it off. With this Model 10, we have to go deep due to how severe the rust is.

You can tell that rust is being removed because it mixes with the oil and leaves behind a rust-colored liquid. Clean this mess up as you go. Once you stop seeing this rusty liquid, you know you’ve gone as deep as the AP brush can get you.

Apply more cleaning oil and go get a cup of tea. Let the oil sit and soak in a bit. Now you are going after that deep and heavy rust. Before you start, run your fingers over the rusty area. Do you feel how the texture is different, how it is raised from the rest of the finish? Note that. It will become more important later.

Do Not Use a Steel Brush!

It’s tempting, I know. It is incredibly tempting because these steel brushes can really rip rust off a gun. Unfortunately, it will likely take your finish with it. Avoid it, and instead, use the softer steel wool. Steel Wool to the Rescue

Use your index finger to steer the steel wool over the rust spots. Manipulate your finger around in a small circle. Your goal here is to level that rust area out with the rest of the finish. Continue to wipe off the rust you drag to the forefront.

Once the rust is smoothed over and flush with the finish, you have removed the majority of the rust. Inspect under a nice bright light to ensure it is gone. If not, continue to make your small circle until the rust is gone.

You can find a 12 pack of steel wool on Amazon here. I repeated this process when removing rust from the Model 10, and it took me about 5 hours total to finish this project. Once I was finished, I wiped the gun down extensively.

You have to make sure you remove the small hairs that steel wools can leave behind. Once that is finished, apply more oil and you are done.

Final Tip: The boat gun needs to remain oiled at all times.

For more firearm cleaning tips The Arms Guide did a review on The Best AR-15 Cleaning Kits.