Let me preface this article by saying that the 1873 French Service Revolver is my absolute, all-time favorite revolver. As a major wheelgun fan, that's saying something. Where You've Seen It If you're a fan of the film The Mummy as I am, you may already know that the chunky brace of revolvers Brendan Fraser wields akimbo style throughout the first film are venerated 1873 … END_OF_DOCUMENT_TOKEN_TO_BE_REPLACED 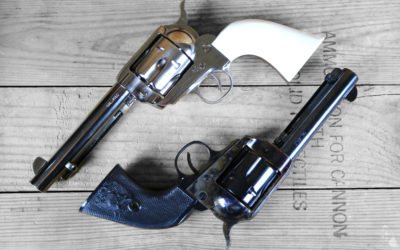 The secret is out, shooters are looking for new challenges and more fun at the range.  The challenge remains however in finding the right gun.  1873 Colt-styled Single-Action Army revolvers are loads of fun.  Booming out 200-255 grain projectiles with the squeeze of a crisp trigger after the musical clicks of cocking the hammer.  Traditions Firearms offers a variant with a few … END_OF_DOCUMENT_TOKEN_TO_BE_REPLACED "El Malo" means "The Bad One" in Spanish, but this classic pistol is nothing but good.  Cimarron imports 1873 Colt reproductions from Italy and includes a few twists to make them more fun.  Models include several movie guns.  Ever envy Doc Holiday's pistol or shotgun?  Cimarron makes one complete with his name engraved.  "El Malo" features an octoganal barrel, and our example … END_OF_DOCUMENT_TOKEN_TO_BE_REPLACED