The firearms market is always changing. One day it’s pocket pistols, the next its pistol caliber carbines. The pistol caliber carbines (PCC) popularity is certainly on the upswing. We have the Scorpion Evo, the SIG MPX, the Kel-Tec Sub 2000 gen 2, AKs in 9mm, and so much more. The market is growing in ‘pistol’s’ with braces, short barreled rifles in pistol calibers, and standard rifle lengths. More than any other caliber the 9mm rifle has taken center stage.

The always popular AR market has been hit with pistol caliber carbine madness as well. Palmetto State Armory produces a dedicated Glock lower. Wilson is building an AR 9 and Rock River Arms has had one forever. I got a great deal on a lower and found myself dedicating my next build to a 9mm rifle. I figured Palmetto state would be the cheapest way to go, but their stuff is always sold out. With this in mind, I began scouring the internet.

This is where I stumbled upon Daytona Tactical. I’ve never heard of the company, and their profile is limited to a few AR15.com posts and Youtube videos. I was a bit skeptical of their company for a few reasons. First off the price seemed too good to be true. Especially compared to other ARs. The AR 9mm rifle kit was under 500 bucks. Obviously, I was intrigued. Next, the lack of an online presence and their website looked dated. So I sent a short email with some questions. I got a prompt reply, so I knew they were still in business. I placed an order and crossed my fingers.

A short while later I received my well-packed rifle kit and immediately began assembly. The lower is a PSA multi cal, so it does require a mag well conversion block which was included in the 9mm rifle kit. The mag well block included was a Pro Mag block. Promag has a hit or miss reputation, so I figured this would be the kit’s weak point. This kit takes Colt 9mm magazines. These mags are affordable. I can find them new for 20 dollars. I ordered two from PSA. Surprisingly, there are numerous mag manufacturers for Colt style mags. PSA Magazines IWI Colt Mags

I was very happy with the kit itself. It’s nothing fancy in terms of lower parts. The lower is all mil-spec, with a standard A2 grip and M4 stock. The upper has a 16-inch barrel with 1:10 twist. The weapon has a nice, slim, 10-inch keymod handguard with a monolithic top rail. I like my guns light so Keymod and Mlok keep finding their way onto my ARs.

The fit and finish are surprisingly well done. The finish is evenly applied and almost matches the PSA lower. The weapon is nice and light, and the keymod handguard it thin enough to provide a comfortable grip.

The trigger is straight mil spec, nothing fancy here. The trigger’s functional, nothing to write home about. If you’ve fired a stock standard AR you know what to expect. It breaks at around 5 pounds and has a little grit and stacking. The 32 round PSA Colt mags have a bit of slop in them, and they do move quite a bit in the mag well. I’m betting the Promag block would work better with Pro Mag magazines. Plastic magazines are typically thicker. This would probably eliminate wiggle. In general, the magazines are not unique, but not as common as Glock magazines. Let’s Break it (Or try too)

With that in mind, I have yet to encounter any issues with the weapon, or magazines. The rifle has eaten a steady diet of FMJs flawlessly. At rapid fire, at slow fire, in a variety of positions. I’ve even used the mag well as a grip without issue. We tried everything within the normal realm of a firefight to cause a jam. I just couldn’t do it. The mags and mag well worked perfectly. In the event of an issue with the mag block there are numerous metal blocks available.

The rifle was close to recoil free. As you could imagine the 9mm is no shoulder pounder. It’s pleasant to shoot. PCC’s are perfect for training kids and new shooters. The rifle proved to be quite accurate at 100 yards. 100 yards is probably the farthest engagement distance I’d expect from the rifle. If we used a bench rest and really tried it go further. However, there are no bench rests in a gunfight. Using a ballistic calculator I’ve found a normal 124 grain defensive round will drop 36 inches at 170 yards. The round will hit with 237 pounds of energy. This would be considered long range for this

Using a ballistic calculator I’ve found a normal 124 grain defensive round will drop 36 inches at 170 yards from a 16 inch 9mm rifle. The round will hit with 237 pounds of energy. 170 yards would be considered long range for this rifle and the drop could be compensated fairly easily. For the most part, this is a close quarter’s weapon. Obviously, the round has some serious limitations. The standard 5.56 is going to be more versatile. If you could only choose one AR 15 I’d choose a 5.56. Ultimately we live in an awesome country, and you have the option for both.

Controls are all standard AR 15. Everything is where it should be. If you’re not familiar with the AR platform I’ll quickly touch on this. The controls are well placed and easy to access. All primary firing functions can be done with a single hand. This means the firing hand can remain on the grip. This makes fixing malfunctions quick and easy. This also makes reloads intuitive and quick. The AR 15 has an overall ergonomic design. Because of the design, it is a favorite of beginners. Regardless of the shooter’s experience, the design is almost the standard in modern rifles.

I cycled through a healthy dose of SIG ammo, Winchester, Federal, and even dirty ole’ Tulammo. It eats the lead and spits out the brass. (Or steel) The weapon works, and it works on the cheap. I spent less than 600 dollars on the entire gun. All things considered, I have nothing really to complain about here. In short. it suffers from the same flaws as any AR 15, but has the same strengths. Regardless of it’s few flaws, its fun to shoot, accurate, and cheap to plink with. 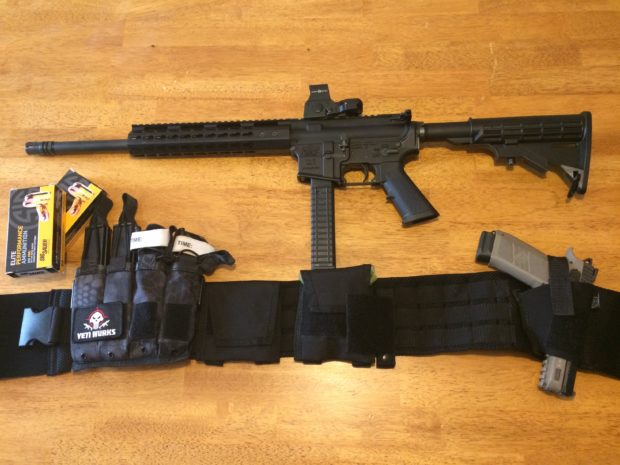 9 Reasons to go AR 9.
Because I already have one in 5.56
My handguns can share a suppressor with my rifle.
Low recoil, concussion, muzzle blast, and noise make it a good kids rifle.
Share an ammo source with your handgun.
Because this is America
Shoot steel at close range
Shoot it at ranges that only allow pistol ammo
9mm is cheaper than rifle ammo.
Because of Chow Yun-Fat’s Sniper scene in the Replacement Killers.