Initial reports from the Dallas shooting described multiple snipers with AR-15s.  CBS news later reported that the terrorist in Dallas used an antique, the SKS.  It now appears that the shooter used a modified Saiga IZ-240 5.45mm rifle. I will not mention his name.

These Police officers gave their lives in Dallas:

Details have emerged about the shooter.  He was a member of the Army Reserve for six years starting in 2009 and received basic combat and marksmanship training.  He served in Afghanistan from November 2013 to July 2014, assigned to the 420th Engineer Brigade as a carpentry and masonry specialist. He was sent home early from Afghanistan in 2014 charged with sexual harassment. He later received an honorable discharge.

He attended civilian shooting training at the Academy of Combative Warrior Arts in the Dallas suburb of Richardson. A spokesman for the New Black Panther party confirmed that the shooter had been a member for about 6 months. He left the group after he displayed reluctance to follow the chain of command.

Police officials found guns, bomb making materials and a tactical journal describing his ideas on fighting.  From the videos of the shooting, he understood the use of cover and concealment as well as the importance of movement.  He made it clear to negotiators that he was out to kill white people.

A source tells thearmsguide.com that when Dallas SWAT made entry after the detonation of the explosive device, they encountered a Saiga IZ-240 semiautomatic rifle on the floor among the rubble.  The weapon had a 30 round magazine, single point sling, Magpul folding stock and a rail system with a Primary Arms 5 power scope.

A gory picture of the shooters body has been published, WARNING: VERY GRAPHIC. 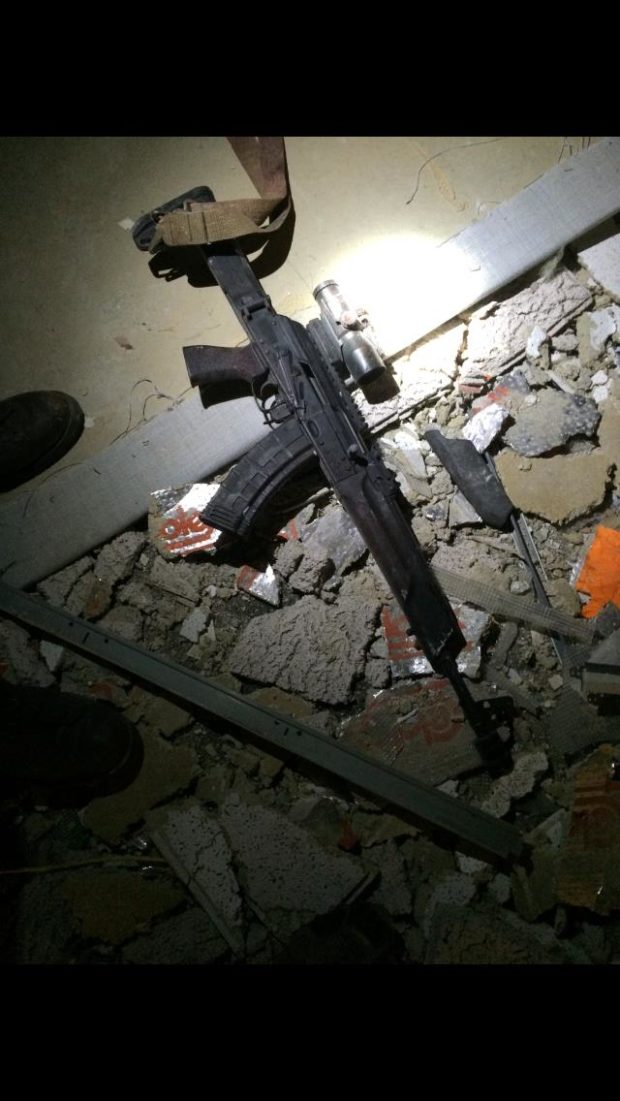 A photo from the scene shows that the rifle was a modified Saiga IZ-240 rifle with a Primary Arms five power scope.  A five power scope makes things appear five times closer than the actual distance,  This scope would allow a very average shooter to see and  hit a man size target at 300 yards.  The reality was that the shots he took were close and did not require a sophisticated rifle or any particular “sniper” skill.

Made at the Russian IZHMASH Arsenal, the Saiga IZ 240 is a hunting style rifle with a black polymer stock and hand guard.  It has a 16 inch chrome lined barrel, a side mounting rail for attaching optics and comes with a ten round magazine.  The Saiga does not use standard AK mags but can be converted to accept them. The IZ-240 fires the 5.45 X 39 cartridge.

Below is a picture of the Saiga IZ-240 rifle as originally imported and purchased by the killer.  It is legal in all 50 states and cost about $650 The shooter’s rifle was modified with the addition of the following parts:

These modifications make the rifle illegal in California and several other states.  Most former soldiers like the AR-15 because they are familiar with its operation.  The Dallas shooter choose an inexpensive rifle associated with America’s enemies.  The Saiga is reliable but not particularly accurate.  The scope he selected is not ideal for close shooting.

The importation of rifles manufactured by the Kalashnikov Concern in Izhmash, Russia was banned in 2014 by an Executive Order issued because of Russia’s belligerence toward Ukraine. The ATF banned importation of 5.45X39 Russian-made 7N6 ammunition in 2014.

Let’s get to the heart of the matter. A murder weapon does not cause murder.  I does not make any difference which weapon was used, it is a heinous crime.  The U.S.  federal government as well as many states and cities continue to prohibit certain types of murder weapons. There are groups which want to focus on specific types of murder victims. None of this has reduced the number of murder victims in the United States.

There have been several recent shootings and some not so recent shootings using “Assault Style Weapons”.  Tabloid journalism loves writing about “Assault Style Weapons” and they love the 1994 Assault Weapons Ban.  This term truthfully reveals the problem, these guns have a style similar to military weapons but do not fire more than one round when you pull the trigger.  They look much more dangerous than large caliber hunting rifles which are actually more powerful.

The term “assault rifle” was a propaganda term coined by Hitler himself to describe the Nazi’s then new machine gun which fired a small low recoil round allowing soldiers to control full auto fire. Automatic firearms have been severely restricted from civilian ownership in the United States since 1934. There is a common misconception, encouraged by some,  that an “assault style rifle” can spray bullets in full auto mode.

In recent terror attacks in France, the murderers used the AK-47, a real assault rifle fashioned after Hitler’s original model.  Since fire arms ownership is highly restricted in Europe, the terrorists illegally bought machine guns on the world market and smuggled them into France. The AK-47 is the most widely manufactured weapon in the world, with 100 million Kalashnikov rifles currently in use. According to Oxford University economist Phillip Killicoat, the average global price of the assault rifle was estimated at $534 in 2005.

The state of California has over a dozen overlapping ‘assault weapons’ laws creating a situation where the only people who know the laws are the poor citizens trying to obey them.  Calguns.org has made a flow chart to help the law abiding keep track.

The San Bernardino killers used AR type rifles purchased in California, the state with the most ridiculous restrictions in the United States.  The killers illegally modified their guns in violation of California gun laws, then killed people which also violates California law. The California legislature has drafted a dozen new ineffective laws which will make most rifles in the state illegal.  These new laws will be no more effective than the current laws broken by the San Bernardino killers. The Dallas killer could have purchased the Siaga IZ-240 in California with a ten day wait.

If banning rifles would stop terror attacks, I would be the first in line to give mine up.  The truth is that disarmament, regulation or law will not stop the lawless.  Terrorist cells operate internationally and have no difficulty bringing weapons across borders.  The insane who wish to murder other humans use swords or any other weapon at hand if rifles are not available.

In another significant mass killing, between April and July 1994, members of the Hutu ethnic majority in Rwanda murdered 800,000 people, mostly of the Tutsi minority, mostly using machetes.  If the Tutsi’s had had a few rifles things would have been different. The Hutu were not slowed by legal restrictions of firearms ownership or murder.

I grow weary of the predictable distortions and lies which come after each murder that fits the narrative.  Black lives in Chicago are lost in much higher numbers than all mass shootings nationwide, but they don’t rate tabloid ink because they don’t fit the assault rifle narrative. Let’s deal with reality and human behavior.  Attempts to restrict technology have never worked. Let’s focus on preventing murder.