But with G2 Research’s new Telos .357 Magnum round, recoil, flash and report is greatly reduced while the effectiveness is increased. In a close-in self-defense situation (most are) a defender may get only one shot off before a bad guy gets shots or a knife into him/her. Quickly stopping the fight is absolutely imperative and this new Telos round is designed to make that happen!

The Telos .357 magnum bullet is CNC manufactured from a pure copper slug to create a huge internally segmented hollow-point bullet that on impact separates in a controlled reaction that releases six segmented copper fragments that spread over five (5) inches! 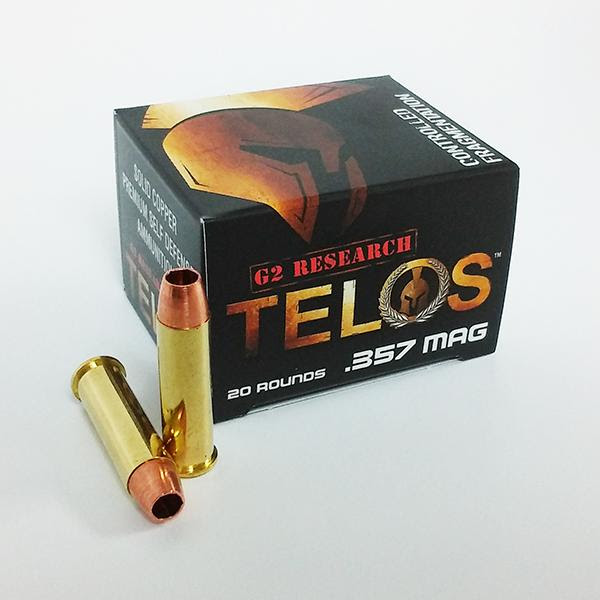 These fragments spread out causing pain, increasing fight-stopping bleeding, and creating near-instant shock. At the same time, the base of the bullet continues to travel forward for additional penetration (as if needed!). This bullet is designed to stay inside the target where it releases all of its energy and reduces the danger of hitting innocent bystanders from a through and through shot.
Why reduced velocity?*
The use of this lightweight, individually CNC machined, 105-grain pure copper bullet is designed to function perfectly at 1,300 fps, thus reducing muzzle flash and especially reducing recoil, making follow up shots (if necessary) quick and controllable.
G2 Research has designed all of its handgun rounds not to penetrate body armor. Most conventional ammunition will not penetrate, either, but G2 Research specifically designed the Telos .357 round not to do so in order to protect those (mostly law enforcement) wearing body armor.
Specifications:
G2 Research, Inc.
P.O. Box 526
Winder, Ga
30680
www.G2Rammo.com