We have written about this pistol before, but it’s had a long and arduous trip to market, and it’s still not really here. It may finally be coming (and here’s another allegation of imminence from four months ago). In any event, we haven’t got hands on one yet — hell, we haven’t seen one for sale, but we’ve found a couple of articles by people who have handled the gun, not just the press releases. And of course, there’s the manufacturer’s website. 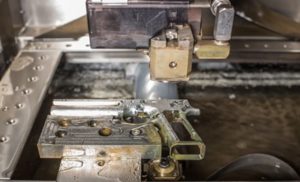 The pistol is manufactured conventionally, for a Czech firearm. That is to say its components are CNC milled from billet or from investment castings (possibly by Poldi, which has cast for ZB and CZ since CZ-Strakonice days, before CZ built the UB factory  in 1936).

But the FK Brno 7.5  offers a unique high-velocity round, a unique buffer system, and unique sights. The FK 7.5 pushes .30 caliber copper bullet at 2000 feet per second, not quite rifle speed, but better than such remarkable rounds as the long-defunct .357 Auto Mag. Its numbers make the .357 SIG look like it has the parking brake on.

It’s otherworldly enough to generate considerable skepticism. When the FK 7.5 first came up on the radar last year, John Zent of American Rifleman noted its sudden appearance on the market had a certain “out-of-nowhere” quality. John Roberts a Guns, Holsters, and Gear also was unimpressed by the claimed velocity, because it can be matched by a 9mm firing an ultralight 50 grain round — delivering half the FK 7.5s energy. An FK 7.5 shortslide prototype photographed by Rob Pincus at the factory.

Here is celebrity trainer Rob Pincus, with what he promises is Part I of a multipart article. Rob was invited to the Czech Republic to try the gun during its long period in ATF purgatorio, and has some interesting comments.

A High Capacity Handgun that fires a propriety [sic] 100 grain round at over 2000fps and costs over $5000. The round, by the way, is still moving at 1500fps at 100 meters… which is the distance at which the pistol is zeroed with a unique set of sights when it comes from the factory. As others in the above links note, the gun is relatively large, fires a very powerful round and isn’t going to be cheap. FK BRNO also claims that the gun is very controllable and capable of high levels of precision. And, the only guns currently in the USA are there for government evaluation so that importation could be approved.

Per Pincus, the company considers itself primarily an ammunition research company, which builds the pistol as a way to get its ammo concept into shooters’ hands. He hits these takeaways — and elaborates on each, so you’ll want to Read The Whole Thing™:

He concludes: “FK Brno have done what they set out to do.” We’ll say again, Read The Whole Thing™, and we’re looking forward to the next part.

The tactical niche this pistol fills is unclear, although it seems to overdo what the Secret Service and Federal Air Marshals Service selected the .357 SIG to do. It is, without doubt, a magnificent engineering accomplishment, and the prototypes seen so far are beautifully finished. One clue is that, in its native country, it is available in a folding shoulder-stocked version, making it a near-peer of PDWs like the HK MP7 and FN P90 / FiveSeVen combination. It also appeals to people who love that kind of engineering for its own sake.