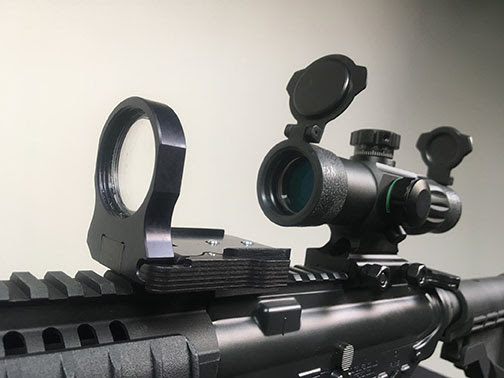 The Second Zero is a precision optical device that gives any rifle shooter an instant second zero distance whether in hunting or tactical application. It works with all optical sights from rifle scopes to dot sights.

Shooters typically zero their rifles with one consistent load at a known distance. A 3×9 scope dialed in at 100 yards makes a .30-06 a versatile hunting tool. But what happens when a deer breaks through the hedgerow more than 300 yards out or you need to use your AR’s red dot at that distance?

While some hunters are well versed in ballistics and bullet drop, many don’t readily keep that information accessible or can recall in that short moment of “trophy opportunity”. The Second Zero offers a simple solution that eliminates the need for hold-over. There’s no complex math involved. Simply flip down the Second Zero precision lens, put the crosshairs on the deer, and pull the trigger.

The Second Zero, a patented prism driven optical device, will revolutionize the way shooters achieve accuracy at long distances. The system mounts forward of a traditional scope or other optic. Optics function normally when the Second Zero is not being used. When engaged, the prisms of the Second Zero, which can be selected based on a hunters specific round, shifts the image to compensate for bullet drop. Simply place the crosshairs on the target just as you would at 100 yards.

Each Axeon Second Zero precision lens systems is regulated to a specific caliber and factory load. All common factory big game and tactical loads are covered and depending on the caliber, several zero distances are available from 275 to 500 yards. Simply choose your caliber and mounting method to get started.

Mounting the Second Zero is simple. Attach it to the bell of a scope, or install it on available rail space in front of an optic on a MSR using the QD mount provided. The prismatic lens shifts the optical image without magnification, so the size of the target doesn’t change. Because it shifts the target image optically (not mechanically) before a targeting device “sees” that image, the shift works when paired with any optic. Precision alignment is not required. The shooter sees the same image before and after the Second Zero is employed. 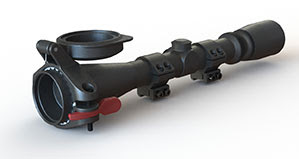 The Second Zero is the fastest way to compensate for bullet drop at extended range. In less time than it takes to read this sentence, and without looking away from the target, a shooter can instantly pull up the Second Zero.

The Second Zero was originally created and patented by John Baker, president of TACOMHQ in an exclusive development partnership of Umarex USA. This partnership will allow the Second Zero to be offered to hunters and tactical shooters worldwide. In addition to the stocked Second Zero product line, TACOMHQ will continue to be able to offer custom versions of the product individually specific to the shooters’ needs though the TACOMHQ custom shop.

“We are extremely pleased to be partnered with Umarex in optical development of sighting devices and in particular, the introduction of the Second Zero product line” stated John Baker, President of TACOMHQ.

“Our acquisition of these and other assets assures that our Axeon Optics brand will be a market leader through innovation.” said Richard Turner III, VP of Sales & Marketing.