Hexmag is the maker of the innovative Hexmag line of AR-15/M-16 platform magazines. Although fairly new to the industry, they have created a unique, patented, tough, reliable with some distinctive features and industry first-designs at a low-tech price. So how did a couple of guys build Hexmag into a multi-million-dollar business in such a short time?
In 2013 in Loveland, Colorado, Aaron Schefter looked over the various AR magazines on the market and thought he could do better. He joined forces with George Brown (now President) and began experimenting with various mold configurations and polymer compounds. 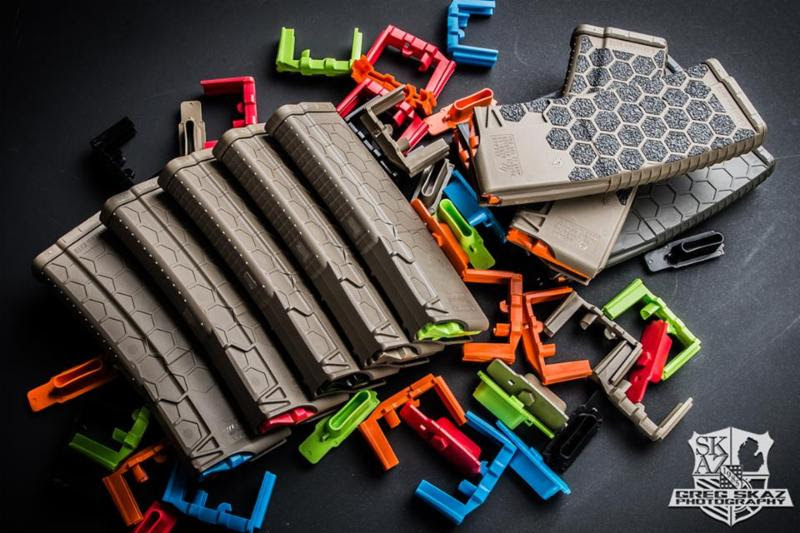 Modifying various designs for some time they eventually arrived at a design that delivered form and function with a unique set of features needed for a state of the art magazine. Designing a magazine that feeds reliably is extremely difficult since most stoppages are due to defective magazines regardless of firearm type.

To get a magazine to correctly lock up tightly in the firearm, feed reliably and add additional desired features such as a sturdy and functional slots for reliably charging the magazine from 10-round strippers is a real trick. The Hexmag duo worked through countless hours of design iterations and composite parings to get it to do all of this and operate correctly.
The guys knew there are problems in desert conditions when it comes to cleaning the magazines from dust, dirt and sand. They had to find an easier way to release the base plate for easy cleaning and quick and easy reassembly–they did and it is a quick and easy tool-less design. They also added a bright colored anti-tipping follower so it is easy to see if the magazine is empty or not in low light conditions.
Let’s address anti-tipping – how do tipped rounds in an AR magazine even happen? The condition that creates this problem came about originally with military metal magazines and then progressed to synthetic magazines. When a trooper had a partially loaded magazine and had to hit the dirt hard and if his rifle hit hard with him (they generally do) the rounds in the magazine would compress down for a split second due to inertia momentum, and they would not always come up correctly, generally with the round tipping down at the bullet or primer end and hanging things up causing a bolt override when the chambered round in the chamber was fired; not a good thing to happen when people are trying to kill you (bang, click click!). By adding longer anti-tilt “legs” Hexmag magazines have solved this problem for both tactical and sport shooting environments.
They then figured another advantage for their magazine was to make the base plate locking button the same color as the follower. Moreover, why not have a selection of accessory follower and magazine floorplate colors to indicate type of ammunition such as tracer, ball, incendiary, hunting and even bullet weight and caliber.

Even better, since their magazines also fit and feed the .300AAC Blackout, .458 SOCOM and .50 Beowulf rounds. Now it’s easy to quickly know what caliber or load you have in the magazine. Hexmag features several colors in their unique HexID Color Identification System.

Furthermore, make it a 30-second job for the gun owner to change out the colors  (see image) if they wish; all this, an industry first. Additionally, and this is trick, if you wish to empty a partially filled Hexmag magazine of ammunition, simply slide the no-tool floor plate off covering the compressed spring area with your hand. Then simply ease the base plate off and remove the spring assembly and the magazine can be emptied and closed back up in a couple of seconds. No more stripping rounds out with the base of a cartridge–like most of us do with other magazines.
The guys wanted to get the magazine in and out of the rifle quickly and easily in any condition, even while wearing gloves or mittens in wet, muddy, snowy or icy conditions. Since it is a Hexmag, they reasoned; why not put hexagonal patterns on the magazines to create a high-traction textured surface? Well, no duh!
Then to make it even better they created an optional rubberized tape (called Grip Tape) to put sticky rubberized hex shaped grip enhancing stickers into the magazine surfaces of the shooter’s choice making the magazine even sticker (not a dust catcher–thought we should add that!).
Looking across the market they saw various plastic and metal magazines that did NOT deliver the durability advantages the guys wanted. After extensive material research and experimenting with many test samples they settled on a proprietary, lightweight, fiber-reinforced polymer. They named it PolyyHex2 Advanced Composite. They were almost ready. 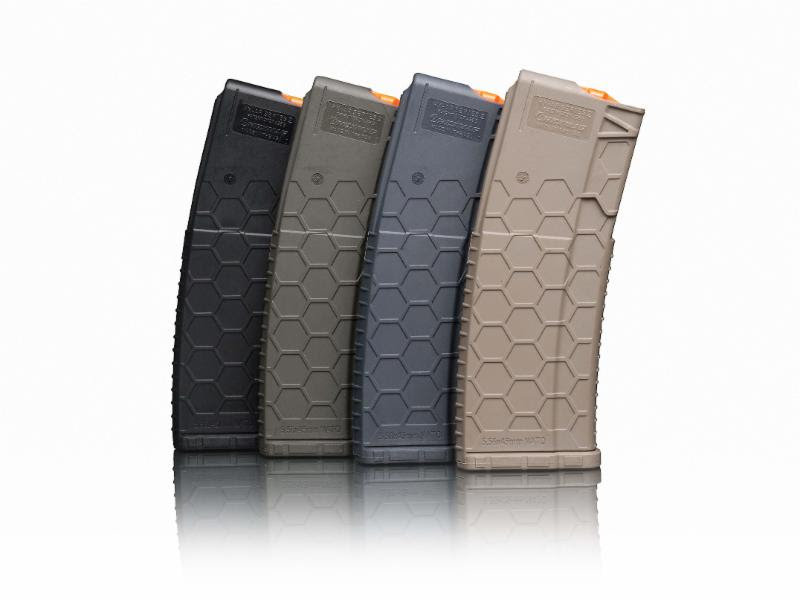 However, they needed to address the magazine springs, a critical and costly component of the magazine. The best spring wire is a high tinsel strength (rust resistant) stainless steel with an expanded metal memory so it will not lose compression pressure if the magazine is kept loaded (charged) for long periods of time-like military and police firearms.

If a spring loses tension after storage while charged with ammunition, the cycle rate of the gun may override the feed rate of the magazine–not a pretty thing in a gun fight–“bang, bang, click, click, click.” Their goal was to produce the best magazine, not just another magazine. It was another search to find a wire made of a composition stainless steel (all stainless is not alike) that is better than anything else–and they did. What they found was a highly corrosion-resistant, memory type tough spring that compresses easily for loading and feeds reliably.
In March of 2013 George and Aaron were ready. Presenting their magazines to some important shooters and distributors for a look-see they were met with the news –“We like it, if you make it, we will buy it!”
Great news and in the Winter of 2014 with their modifying, fine-tuning and testing all completed (for now) the orders came flying in for a product the AR/M-16 market has needed for decades. In fact, the magazine proved so good they offered an industry first, a lifetime warranty! The amount of orders was overwhelming and they quickly fell behind on production.
They searched manufacturing sources everywhere that could manufacture their advanced fiber enhanced composite magazine. That proved challenging since they wanted the production done perfectly to maintain the tight specifications and quality control levels they were demanding.
Finally, they had most of the production capabilities in place. With sales booming they labored on but being fiddlers and tinkerers and a company staffed with shooters and former military, they continued the magazine tweaking process–it’s just what they do. Adding to the product line, the next array of magazines was made in 10- and 15-round capacities allowing access to states with capacity restrictions. The patented Hexmag True Riser system changes the internals of the standard 30-round magazine to 10- or 15-rounds. This allows shooters to legally practice with a full-size magazine in reduced capacity states.
By mid-2016 their next magazine evolution was completed with the Series 2 magazine. The alteration produced a sleeker, “ergonomic” interior, an improved feed lip, a tighter lock up for firmer magazine seating and enhanced stripper adapter grooves for easy ammunition charging from military 10-round stripper clips.
This is a premium magazine that one could drive a heavy vehicle over (who does that in the real world?). It works incredibly well in many ways such as functioning the likes of .300 AAC Blackout, .458 SOCOM, and .50 Beowulf rounds and yet is easy to disassemble for cleaning and utilizes their patented unique HexID color coding features.
The rest and for them the best of the story is they are selling their popular magazines NOT by the pound but by the ton. They also moved into covers for Picatinny, M-LOK and KeyMod rails and offer two unique AR pistol grips, one having 3 angle adjustments the shooter can quickly change as needed.
A couple of clear thinking guys who saw a way to make a better mouse trap, the guts to try it and the ability to get it done. It is the American way, so American in fact that every single part of their products as well as the assembly is made and done in America. Not bad for a couple of guys with a dream! Well, that is the Hexmag story…for now.
Want to know more?  www.hexmag.com